Are you ready for the O Antiphons? 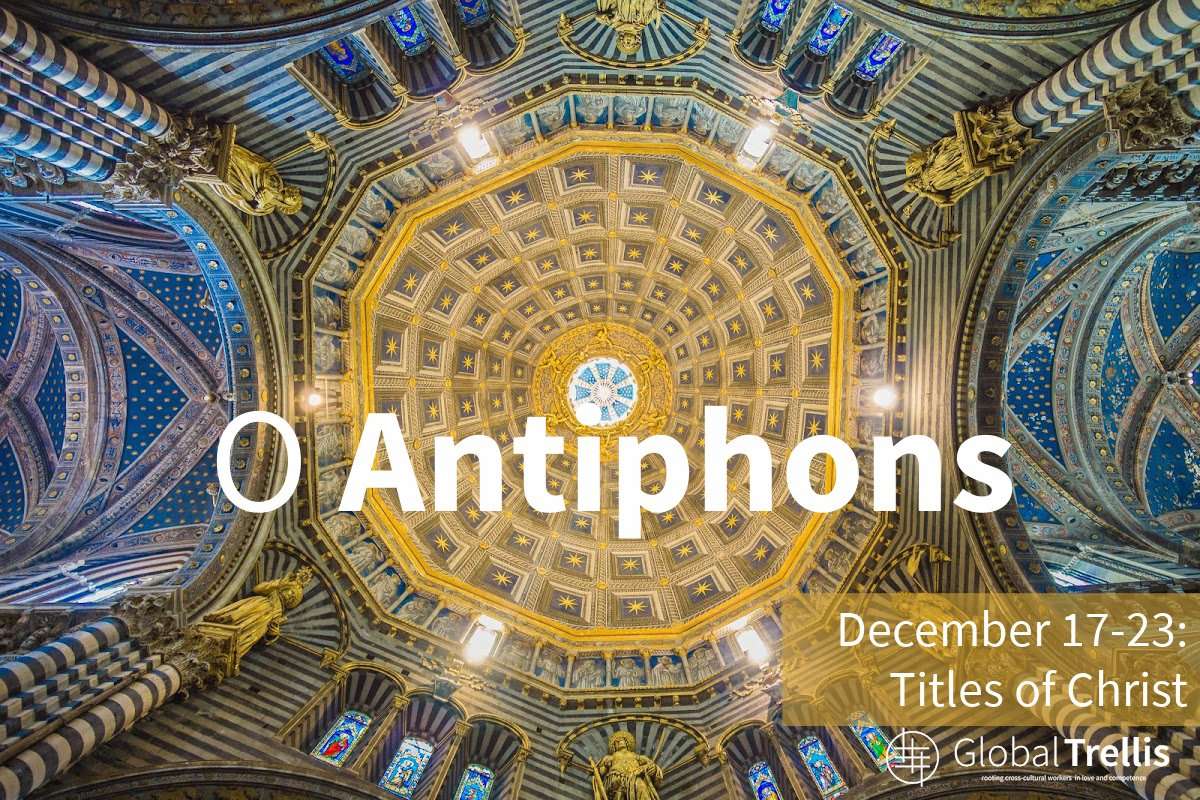 Last year I went down a bunny trail in December. It was the first I had heard about the O Antiphons and their relationship with the Chrsistmas Carol “O Come, O Come Emmanuel.”

If you’re wondering what in the world I’m talking about, The O Antiphons are also called “The Great Os;” they start Thursday, December 17th, and run through December 23rd. According to the dictionary, an antiphon is “a short sentence sung or recited before or after a psalm or canticle.” In this case it refers to the chorus that is repeated after each verse.

Why the “O?” You can thank Latin for that addition. While they might be new to me, they are certainly not new to Christianity. “The usage of the O Antiphons was so prevalent in monasteries that the phrases, ‘Keep your O’ and ‘The Great O Antiphons’ were common parlance.” (source)

That sentence brings a smile. Keep your O.

Last December I quickly put together a song sheet, found a video of the carol on YouTube, and every evening read the verse from the song on Global Trellis Instagram stories. While it was okay, there was certainly room to have a more meaningful way to use the O Antiphons to help us prepare for Christ’s birth!

Since then, I have learned two key facts about the O Antiphons:

1. I have to confess that many of the ways we prepare for Christmas don’t point to Christ as much as they could. I am not interested in bashing the decorations, music, gifts, and other ways we prepare. They do help to build anticipation. But I can see how the O Antiphons provide a structure for the final seven days of Advent that you and I need. Each day focuses on a title or attribute used in the Old Testament to describe the Christ. These gentle daily reminders help us to focus on Who we are anticipating.

2. There are no recordings that have all seven verses. What?! I know. I went down another rabbit trail, this time on YouTube, and listened to so many versions of “O Come, O Come” my head began to swim. Many versions only have four verses, a few five, none had seven. Not one to be deterred, and believing that you and I need a version with all seven verses, I reached out to Joy Beless of The Invitation Project and asked if she and her team would record a version that we could use.

Her response, “Amy, I’m intrigued. Let me look into this.” A few days later, after she had checked around 50 versions of “O Come, O Come” that she found online, she wrote me. “Why have I never heard of the O Antiphons?! And you’re right, I can’t find a version with all seven verses. Let’s do this!”

Joy and her team have recorded a version that is eerily perfect for a global community. You’ll have access to it when you sign up to receive daily emails from December 17th-23rd that will prepare you, oh cross-cultural worker, afresh for Christmas this year. Each day focuses on a title of Christ and has a verse from the song, a verse in scripture, and a brief response . . . and a song that you can actually sing all seven verses to if you want!

We will not have any blog posts until after Christmas so that you can get the O Antiphons. If you have already signed up to receive the O Antiphons, you are good to go. If not, sign up today.

Happy Advent as together we anticipate Christ’s birth,
Global Trellis and The Invitation Project