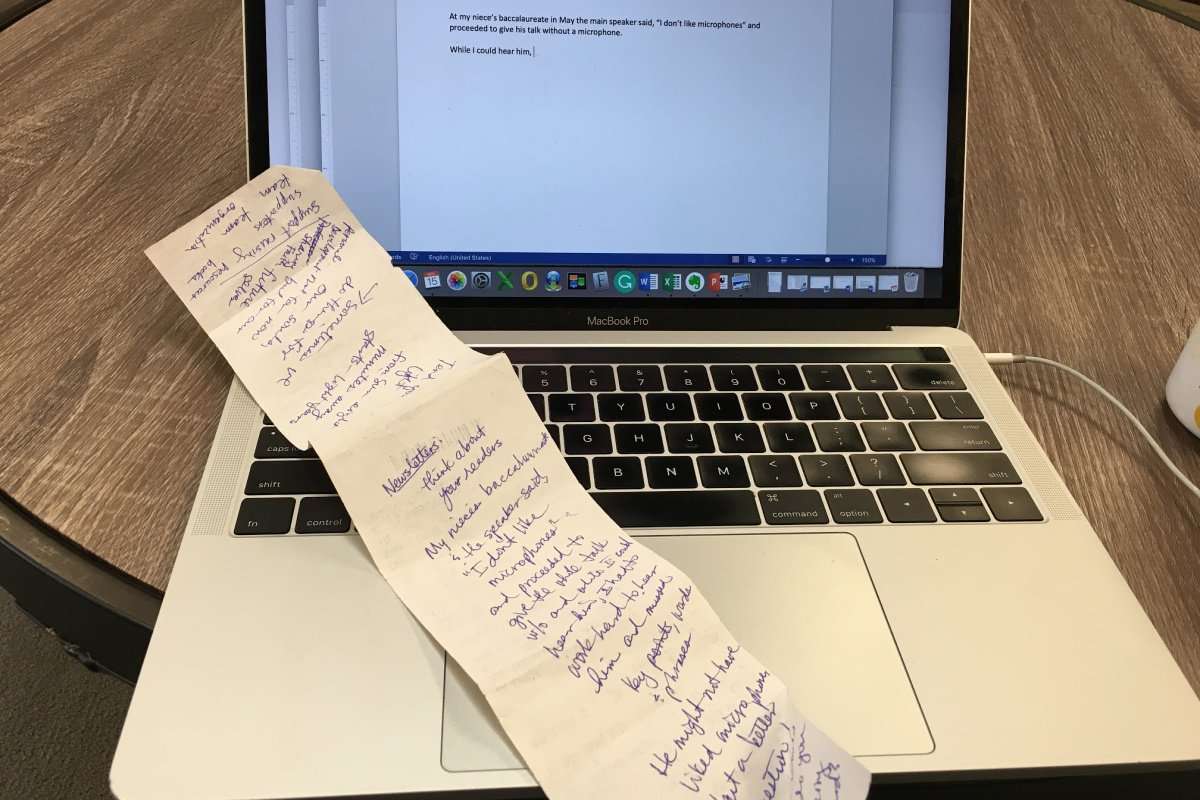 At my niece’s baccalaureate in May the main speaker said, “I don’t like microphones” and proceeded to give his talk without a microphone.

While technically I could hear him, I had to strain and concentrate to follow. I know I missed key words and phrases. His selfishness annoyed me so much I dug through my purse and found an old receipt so I could make notes.

Not about his talk, but the experience. In part I wrote, “He might not like using a microphone, but a better question or focus for him as a speaker would be: do you like being heard?”

As someone who communicates through newsletters and values communicating with supporters, his attitude pushed my buttons because he put his preferences ahead of the needs of the audience.

In the title I called him a jerk. Truth be told, he a lovely young man who has dedicated his twenties to working with local youth groups. He communicates and connects well with young people. The problem was not him or his content, the problem was in that context, the way he chose to communicate distracted from his message.

Had he simply used the microphone provided, the audience would not have noticed he was using a microphone, we would have been captured by his message.

So, what I really mean is don’t be an unnecessary jerk when you write newsletters. I love newsletters and you enjoying communicating with your supporters I wrote two books. Love, Amy: An Accidental Memoir Told in Newsletters From China and Enjoying Newsletters: How to Write Christian Communication People Want to Read.

One of the cardinal rules of writing is to think of your reader. Make it easy for them to read.

Case in point, I received an email newsletter today and after briefly scanning it almost hit delete because my brain could not quickly and easily read it. However, even though I love deleting emails and getting them out of my inbox, I saved it to review as an example of well-meaning folks who didn’t think enough about their readers. My takeaway from their newsletter:

1. Break up the content. Long paragraphs that are jammed together make it hard for a reader to know what to focus on.

2. Be clear, not clever. I am a fan of clever communicating! A well-placed pun, poking fun at yourself, a culture lesson where you learn through humorous error? All welcome. Using seven different colors in print, doesn’t actually help your eyes, does it? (I tried to mimic it here, but it didn’t work, so I made a document showing this post you are reading with different spacing and color added for you to see what I mean.)

3. Use simple language. The curse of knowledge is when you forget what it is like not to know something. You might know what “Peace 4.0” is, but chances are, your reader who is a supporter doesn’t. Without meaning to, we can lose our supporters in details that might seem necessary in a first draft. But when you edit and proofread your letter, look for places you can substitute jargon (such as “Peace 4.0”) for simple language (“a workshop about marriage”).

What I learned from the baccalaureate speakers is that no one cares what you have to say if you say it in a way they can’t follow or have to work too hard. But more than that, with one simple easy to make change, he could have had us eating out of the palm of his hand.

Your supporters want to hear from you! They really do. They love you and care about you. But they are also human, and will barely scan your newsletter if

Thankfully, if you do these three simple things, your supporters will get to the end of your letter with little effort because you helped them.

Leave a comment in the next 48 hours and three of you will win your choice of Love, Amy or Enjoying Newsletters! Woot woot!!!

(Winners have been notified.)